This is the output from the 2011 Mae Astrid Tobias Writing Workshop for Children, conducted for students of the University of the Philippines Integrated School (UPIS), and mentored by members of Kwentista ng mga Tsikiting (KUTING).

The workshop was held over four Saturdays in October 2011, at the UPIS High School, from where Astrid also graduated.  Nine students from Grades 5-6 participated in the workshop and enjoyed individual mentorship from KUTING authors. 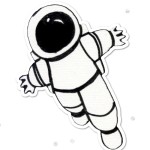 It also features the poetry of Ava Viloria, Phil Cosep, Christian Gelera (in English), and Dana Yssabelle Luna (in Filipino).

Dr. Lalaine F. Yanilla Aquino, who organized the workshop, wrote an Introduction to the volume, while Augie Rivera wrote the Foreword.

The cover was designed by Gigi Yia while Mary Rose Velmonte illustrated each contribution.